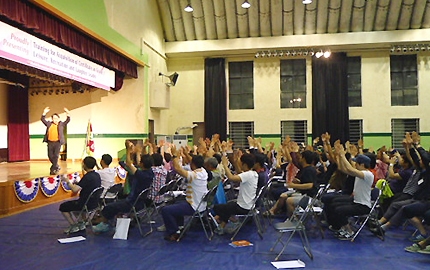 1) As the old saying goes, “We can’t spit on a laughing face.” Laughter makes people happy. Laughter not only simply makes people happy, but has an effect on the mental and physical health. Living happily laughing is a way to keep healthy. There is an old saying that once you laugh, you get once younger and happiness flows in. All of this has been proven by modern medicine.

2) Laughter region (left brain, parietal region)
If we laugh once a day, our life is prolonged by two days. People have a few things that animals don’t. One of them is laughing out loud. Animals can’t. Doctor Itzhak Fried of the School of Medicine at the University of California discovered the laughter region by chance. While investigating what part of the brain triggers seizure in patients with epilepsy, he poked the parietal region of the brain when the patient suddenly laughed.

Doctor Fried found it strange and poked again and once more the patient laughed. Thus, he discovered by change the part of the brain that triggers laughter and started to research the region.

But when he poked the brain of a monkey, rabbit and cat, none of them laughed. Many animal species inhabit the earth, but not a single animal laughs. Even if we tried to make a dog, the closest animal to people, laugh, it wouldn’t laugh. Once on TV, they broadcast a program on a laughing monkey and lion, but they weren’t quite laughing but only moved their eyes and facial muscles from training. Only people were created to laugh. I believe God created only human beings with the laughter region so that we would laugh a lot and be healthy.

3) Laughter, the best condition for wellness
The longest word in English is 1.6 km long. The 1.6 km long English word is “smiles.” There is a mile between the two s. One mile is 1.6 km. Maybe the word smile was thus made so that we would live long and healthy laughing. John F. Kennedy said that if there is one thing on earth that is true, it is laughter. Laughter heals the earth and makes the body beautiful. You should laugh if you want to be beautiful and handsome. If we look around, even if some are not good looking, if they laugh a lot with always a bright heart and positive thinking, they stand out as beautiful. On the other hand, even if some are pretty but easily gets angry, is hysteric and does not care of their neighbors but only takes care of themselves, the value of their looks drops. The more we laugh, the more our hearts warm up and we become full of joy and love. Laughter has the capacity of fundamentally changing people both internally and externally. In a happy family, we should hear the sound of work, reading and further laughing. Laughter is the best medicine of all medicines for both the physical and environmental health and the most important condition for wellness.

The father of laughter study is Norman Cousins.He became the father in this field because of the following reasons. Cousins was an editor of the famous U.S. Saturday Review. He went on a business trip and was returning when he became ill with a rare disease called ankylosing spondyliti. It is a type of rheumatism that causes inflammation between bones with low recovery rate. He was about to die with this disease at the age of 50. When he thought he would die at the age of 50, he became angry and bitter. It was then that he read a book in his library by Professor Hans Selye of the University of Montreal about life’s stress. While reading, he was moved by the statement that joy in the heart is a good medicine. So, Cousins concluded that joy in the heart is the best medicine and started to laugh. As he continued to laugh, the pain started to dissipate. He was really amazed that his pain dissipated and he slept well. But one day, he got up when he found that one of his fingers was opening. From then on, he laughed a lot with his family as he had heard that laughter helps to open the fingers. And ever since, his body got better and he was completely healed. Healed with laughter, Cousins was so amazed that he went to Harvard and Stanford University and told his story.

Cousins was so amazed of the healing effect of laughter that he quit his job as editor of Saturday Review and started to work as an assistant under a professor of medicine. He thus continued to study and started to research on the laughter’s influence on treatment. After a few years, he got to make a presentation about his paper before professors of medicine. The content of his paper  was so sound and based on research results that the professors and many people were astounded.

Cousins thus became a professor of medicine and devoted the rest of his life to laughter and health at the University of California in Los Angeles (UCLA) in the United States. That is why we call him the father of laughter. In his bestseller book Anatomy of an Illness, laughter is said to be a bullet-proof vest. Whichever germs, bacteria and viruses cannot enter the body of those laughing. And while laughter helps to keep a healthy body, derision doesn’t.

1) Instinctive laughter is the expression of pure energy inherent in human beings and we instinctively laugh to satisfy ourselves when we pursue psychological comfort and stability.
2) Artificial laughter is made calculation and comes from desire. It is packaged laughter with a purpose.
3) Mental laughter as an outcome of cultivating a good personality derives after we have a sound mind.
4) High emotions and a sense of mental superiority generate creative laughter. When we do good works such a sacrificing and volunteering as part of religious or volunteering activities, we get to laugh from satisfaction. It is creative laughter emanating from high mental satisfaction and a good personality.
5) Laughter can be handed down and developed through teaching. Laughter is generated by the social environment and education and its quality and amount differ when trained.
6) Human beings laugh when a person or phenomenon is not normal and is exceptional and we then laugh affected by surrounding stimuli regardless of our will.

3. How to make people laugh

1) Develop and lead laughter dances or songs according to your personality
2) Develop one’s distinctive voice to vocally mimic various people
3) Challenge the normally expected because people laugh when their expectations are suddenly challenged
4) Exaggerate to the maximum what you want to say with passion by making overstrained interpretations and sophistry
5) At times, don’t hesitate to play the fool and make fun of social conditions with trenchancy
6) Use synonyms and interpret them differently. This generates laughter.
7) Develop idiosyncratic expressions and body movements mimicking the movement of machines and animal behavior

8) Practice the way of speaking, behavior and body movements of comedians

Famous sayings about laughter in the world are as follows.

1) People who laugh actually live longer than those who don’t. Very few people know that health depends on the amount of laughter. (James Welsh)
2) Laughter is contagious and infects. It is good for your health. (William Frey, professor at Stanford University)
3) As long as you laugh, your gastric ulcer does not get worse. (패티우텐)
4) We don’t laugh because we are happy, but are happy because we laugh. (William James)
5) I have seen the capacity of laughter. While laughter cannot be suppressed, sorrow can and can be further changed to something hopeful. (Bob Hope)
6) People without a sense of humor are like a cart without a spring and creaks every time it bumps into a stone on the road. (헨리와드 비쳐)
7) Envelop your heart with joy and laughter. Then, they will block all that is harmful and prolong life. (William Shakespeare)
8) Laughter is not only a medicine of the heart but also makes the body beautiful. You are the most beautiful when you laugh. (Karl Joseph Cushel)
9) You can’t spit on a laughing face..
10) Much blessing comes to people who laugh.
11) We become once younger when you laugh once and once older when we get angry once.